Let's look at the photograph
Julia, the shortest of the two girls couldn't be much older than seven. The picture was taken in a studio, perhaps it was Borry's in Thief River Falls. Julia's father, Andreas was about forty-eight and Hannah, the mother, around fifty. For years I was fooled into thinking the oldest boy was the tallest boy! Actually Olaf, (1875) was the oldest. Gust (1878), was three years younger.
By now the family had moved on to live in a wood frame house with a front porch. Andreas was a farmer and the boys were already working for other farmers. According to the 1900 census, Andreas owned his land, was a naturalized citizen, had been in the United States for 19 years and could read and write. It also states the family spoke English. It is possible they knew English but Norweigan was spoken at home.
Gust and Olaf were considered farm laborers, Julia and her sister Hilda were in school. Why, do you think the girls are wearing matching dresses? How were those dresses made? Did Hannah have a sewing machine? OR did the girls make or help make their dresses? Where the boys' suits cut down from other items of clothing? What do you think of Andreas beard? This is the only family portrait known to be in existance. 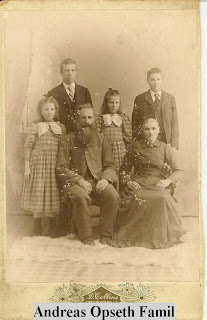 Oh! How I wish each of them could jump out of the picture and tell me about their lives!

The beard's kind of scruffy looking, but she's really beautiful. Love her fine facial features, and I can tell she's got a great hourglass figure (or the dress is cut in a very flattering way.)

Big Bows are coming back into style. The designers here call them "BFB's" (big f***ing bows)!