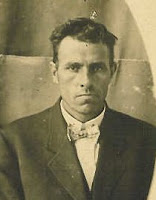 Gustav, as we remember, was born in Norway and came to the United States with his parents, Andreas and Hannah, and his older brother, Olaff. In clippings and other articles mentioning his name, he is referred to as Gust.

When I used to look at his pictures as a child, he scared me. Now, when I look at him, I see how my brother, Greg resembles him in some way. My uncle Harry resembles him too. Except for that marvelous head of hair, which in all his pictures look rich and full. It may have just been dirty and he took his cap off and finger combed it.

Of the two boys, Gust was the go getter. He often was off farming somewhere and would have Olaf join him. Although he never held any offices like Olaf, he managed to get work, keep work, keep busy, and get a 16 Horsepower Rumely Engine tractor to be the "first man with the tractor" at harvest time. It is also mentioned he spent time cutting train loads of green cord wood north of town. The poplar trees were plentiful. He started a saw mill and would move it from place to place and plane wood for others for a price. According to the snippets in the newspaper, he was always going some where and doing something, including trips to Minneapolis to see his sister, Hilda.

Gust is best known for his stone masonry work. He built a granite wall at the Tourist Park in Thief River Falls. It was close to were out family lived; I liked telling people my great uncle built it. The care taker of the cemetery book for Rindal wrote a note stating several buildings he had built.

I think my favorite story is about Gust and his sister, Julia. The summer before her oldest child was born; she was driving a team for Gust loaded with stone for the Rosebank School. In a time when pregnancy was a delicate matter, she was doing a man's work!

Gust built a house on the east end of Rosewood in the twenties. He went to a village called New Maine to get cedar saplings to plant near his house. The foundation and the basement were building out of stone.

It wasn't unusual for people to work spring to fall and then do nothing in the winter. Such as it was with Gust and Olaf; they spent their days in his house in Rosewood. In the basement they carved, "Men of the olde stone age" on the wall along with a bubbling beer glass, grape vines, and the year, 1933. The house would later be sold to the children's grandparents. Olaf's house was sold to the other set of the children's grandparents; that house was moved to town. Mrs. Anderson sold the house in the spring of 1968, some years later it was torn down and the stones were donated to the Marshall County Historical Society in Warren, Minnesota. Yes! I found them and will share that picture with you.

Gust did own land. He had a certificate of the Register of the Land Office at Crookston, Minnesota. His land was according to the Act of Congress on the 24th of April, 1820. Andreas, Hilda, and Olaf's land were all from The Homestead Act of 1862. The issue date was May of 1903 it was a patent for 40 acres. It makes me wonder just how poor the land was. Where is that plat map from 1909?

When I imagine Gust, I see him as a hard working, rough and rowdy person. I didn't know him but my grandmother told me he was good to her. In the security of her lap, while looking at the picture, I could believe her.

I wanna see his house!

This is the house I was brought up in, in Rosewood. There were two rooms in our basement, the first room you walked down to through the "cellar door" in our kitchen. It had a cement-blocked in wall, called the cistern. During dry years I can only remember one time having a "water truck" come and unload a LOT of water in the cistern.
Our basement had a dirt floor..there were 2 rooms in our basement. The 1st room had a "potato bin" against the North wall. Just to the right of this room was the "cold room". A room with shelves from floor to ceiling against the North wall, that's where all the stuff that Mom canned for winters use, was stored. Also in that East room is where the the stone wall (the East wall) where the words "men of the olde stone age" was. There were beer steins with foam on the top portrayed too. I wasn't familiar with full beer steins in those days, but, it sure looked interesting!
There was also a wood stove in this East room. Dad kept a fire going there during the winter months. We also had tubs of sand in the cold room that Mom stored carrots in. Whenever she needed carrots she would have me go to the basement, dig though the sand and bring her however many carrots she needed. The carrots kept VERY well that way!
Spring ALWAYS meant water in the basement. That was just a fact of life. We used to have a plank that went from, like, the second or third step across the water to where ever it was set against the "potato bin". Going back as far as I can in my memory I can not remember ever taking a misstep off this plank! It might have been 6-8 inches wide.
Mom always canned way too many pints of pickled yellow beans. Every time people came for Sun. dinner or any other time people would come..we had to use up the "pickled yellow beans" Maybe I wasn't the only one that didn't fully appreciate them?

I think he's very good looking!
And I want to see the house, too!!