A Family Portrait of the Mellem Family

Dating the picture: I am going to say about 1905. I am looking at Mabel, standing between her parents, she looks about seven. Tina looks about ten. What do you think? 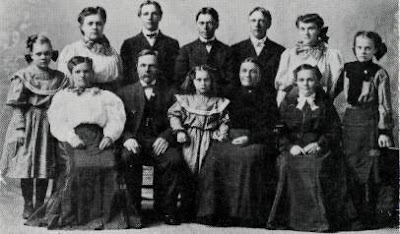 Hey..I'm lucky enough to have known 4 of these kids! Ella, who lived in Roseau about 40 miles North of us, Nina,(Grandma Bloom), Emil and Mable. I can only remember seeing Mabel 2-3 times when I was a kid. She too was a jolly, fun-loving person, like Emil was! Sad to say, most of what I remember about Grandma Bloom is after she had a stroke. She lived at Valley Home in TR,(the old one by the Baptist Church). It was dank and dark in there. I didn't like to go visit her with Dad, especially when she lived on the 2nd floor. Later she was moved to the ground floor, which was at least lighter! Even though she had mostly lost the ability to speak, she would always point to the window facing West (which was the direction of her house, and say "Home, Daddy, Home". It was really sad to see and hear her like that..thank God I had much happier memories of her from earlier times.
I was born in '51 and I think she died in '62 or '63? It was just tough seeing a person that had always been strong and able, being so weak.
One of the happy memories I will always remember is when she worked at Jung's Bakery, which was between Montgomery Ward's and Red Owl Grocery store. (Now Penney's and Napa Auto Parts).
I can still taste those little, round powder sugar coated Russian Tea Cakes. They cost $.05 for 3 of 'em! MMMM good!