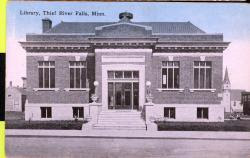 I started thinking about libraries when I read about them in the Rosewood News.

As mentioned in last week’s issue, a meeting was called at the business rooms of the Farmer’s State Bank last Friday evening and a library association was formed. The Association is directly connected with the State Traveling System and will secure all their books from this source. Books will include generally fiction and reference for adults, juvenile books and Scandinavian books and books in the Scandinavian language, besides other topics such as history, general science and domestic problems which may be secured by application. The library board consists of ten members, vie: As Holm, Herbert Carlson, Anton Gulseth, Joel Shoberg, LL Furon, Benhard Ranum, Mrs. B Ranum, Mrs. Eva Carlson, JS Sorenson and Alex Hellquist. Mrs. AS Holm is the librarian. The first set of books is expected about December 1. It will include 39 adult books, 20 juvenile and 6 Scandinavian books. All books will be kept at the Farmers State Bank and may be borrowed without cost by application to the library.

December 1920
Rosewood News A number of new library books have been received for the public school library at District 41. These books are mostly juvenile fiction are free to use by the school as well as the public within the district.

January 1921
Rosewood News Will all those who borrowed books from the Minnesota Traveling library prior to January kindly return them at once. The rules with this library state that no book shall be retained longer than two weeks, but certain parties seem not to be aware of this fact. Books may be renewed if required but must be brought in for renewal. The library, located in the Farmer’s State Bank is open Monday, Wednesday, Friday from 1-4 in the afternoon.

A year later, a small one story building was erected near the old fire station at First Street and Main Avenue. It was on the north side. They hired a librarian for $14 a month. Up until this time it was a private venture.

The city took it on a few years later and was in a basement of a city owned building.

It was known that Andrew Carnegie was offering money to build libraries and a grant was received to build the ‘new library’ at the Northeast corner of Main Avenue and First Street.

I am certain the same librarian was there the entire time I was going to and being scolded for talking in the library. Or, was that I the school library?

I did NOT know how to read the card catalog. Who was this Dewey guy? How come he got to make the rules? Can you imagine some stern tight haired, pursed lipped old lady with fat ankles telling a short all hair and eyeball kid, “Each main class has ten divisions and each division has ten sections. Hence the system can be summarized in 10 main classes, 100 divisions and 1000 sections”, and said kid having a clue?

The building smelled of old paper and the lightening was poor. Where were the bathrooms? What was in the basement?

I would make a bee line for the corner and sit on the floor and read my Bible, it was called, The Wizard of Oz. Wandering through the library looking at the numbers wasn’t allowed. SHHHHHHH!

Many high school students joined library club. I wondered what that was all about. But you couldn't talk there either, so I opted to wander in the high school isles and get a feel for what Dewey did.


100 was about life in philosophy and psychology, I always wondered why it was closest to the check out desk.

I met Normal Vincent Peale books in this section.

300 Social Science
The Amy Vanderbilt complete book of etiquette, yes, I can do that. Now, tell me again, which fork do I use?

500 Science
If I ever loose Tom in the library, he will be here studying weather patterns. Just look for the well dressed man with a notebook and a pen in his pocket.

600 Technology
A friend knew I read five books from this section to learn how to plant a tulip.

700 Art and recreation
What was more important to a camping family than Woodall’s Campsite book?

800 Literature
I learned about this section when I was all caught up in poems by EE Cummings!

And where do you think the genealogy books are? If Tom can’t find me he can just come to the far corner and there I will be!

But wait, the Dewey guy must be in major trouble by now. Where is the computer stuff? Doesn’t it need a section all its own? What if I wanted one thousand and one computer words that I needed to know, where would I look? TRIPLE OTT! Take that Dewey!