May I Introduce Mr. and Mrs. Benhard Ranum? 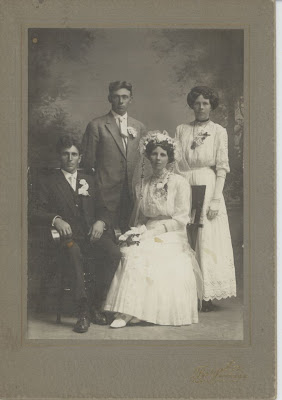 This is a proud day for me. It is a day I remember every year. My grand parents were married on June 24, 1911. Grandpa was 31 and would turn 32 in December; Grandma was 25 and would have a birthday in October. Two of the children's grandmothers were born on the 24th of October, both of them were named Julia, both had maiden names that started with "O" and married men with last names beginning with "R". Can you tell I love trivia?

Benhard referred to Julia as "no spring chicken". Ah, to be 25 again!

Benhard had become known as a carpenter; he went where the work took him. Julia had lived in the city of Thief River Falls as domestic help before she married as is stated in the city directory.

They were married in the Rindal Church where they were members. They would live with her parent's, Hannah and Andrew Opseth for the first year, as was common in those days.

I had hoped as a small child, to be married in her dress. I just knew something so beautiful must be carefully tucked away. Like any other pioneer spirited woman, Julia cut it up and remade it into something else.

I will offer three pictures of them before I go on to the Henry Rye marriage. Two of the wedding including Julia's sister and her husband Harvey Skinner as part of the wedding party, one of the their fifth wedding anniversary. Oh! Wouldn't this be a good time to share the altar at Rindal Church?